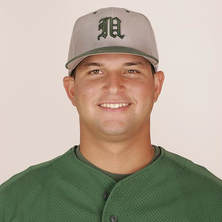 Living the Dream.  Every little boy imagines playing major league baseball, but for Yonder Alonso, whose father had played for Industriales of the Cuban National Series in Havana, that dream took a most unusual route.  Yonder’s parents, Luis and Damarys, defected from Cuba and settled in Miami when Yonder was just 9-years-old.  Yonder eventually took the field at Coral Gables High School, where he was a two-time All-State and three-time All Dade County selection.  Drafted in 2005, he chose instead to take his talents to the University of Miami.

As a freshman in 2006, Yonder helped UMSHoF member Coach Jim Morris’ Canes to the College World Series by hitting .295 and leading the team with 10 home runs and 69 runs batted in.  He followed that up with the team “Triple Crown” in 2007, leading the Canes in batting average (.376), home runs (18), and RBI (74).  The home runs led the Atlantic Coast Conference (ACC) and he was second in the conference in on-base percentage (.519) and slugging percentage (.705).

The “Dream” that Yonder saw as a kid would begin to materialize in 2008 when he was named a consensus All-American by Baseball America, Collegiate Baseball/Louisville Slugger, and others.  He led the Canes to their first ACC Championship, along with another trip to the Omaha and the CWS, while once again leading the team in batting average (.370). RBI (72) and home runs (24), the second most home runs hit in a season in school history, behind only UMSHoF member Phil Lane’s 25 in 1982.

Drafted in the first round of the 2008 Major League Baseball draft by the Cincinnati Reds, the 7th pick overall, Yonder would make his major league debut on September 1, 2010.  He has played for the Reds, San Diego Padres, Oakland A’s, Seattle Mariners and the Cleveland Indians.  Yonder announced his retirement from Major League Baseball on November 20, 2020.