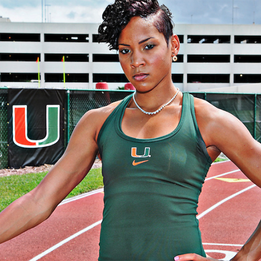 T'erea Brown will be remembered as one of the finest hurdlers in University of Miami track and field history. Originally from Hampton, Virginia, Brown specialized in the 400-meter hurdles, and was coached to greatness by UM Sports Hall of Fame member Coach Amy Deem.

Brown finished as the national runner-up in the event three times, before winning the NCAA championship as a senior in 2011.  A six-time All-American, she still holds the school record in the 400-meter hurdles event.  In 2010, she was named South Region Track Performer of the Year by the US Track and Field and Cross-Country Coaches Association. She earned a 2nd place finish in both the 100-meter hurdles and 400-meter hurdles at the 2009 NCAA Track and Field Championships in Eugene, Oregon. In 2010, Brown was the USA national champion in the 400-meter hurdles, becoming the first University of Miami hurdler to accomplish the feat.
​
After her University of Miami career came to a close, Brown earned a coveted spot on the USA team for the 2012 London Olympic games by winning the U.S. Olympic Trials, then set a personal best in the semifinals in London (54.21 seconds), on her way to a 6th place overall finish.