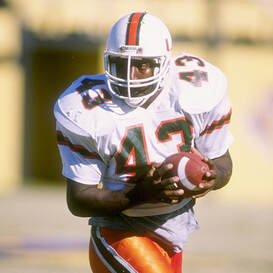 Future Hurricane Cleveland Gary was a high school sensation in football and baseball at Stuart’s South Fork high school, but started his college football career at Georgia. After being named the best freshman running back in the Southeastern Conference for the Bulldogs, he transferred to Miami and began his Hall of Fame career for The U.

Gary shared time in the UM backfields of 1986 and 1987, but in his senior season of 1988, he stood out in leading the Hurricanes in four major offensive categories: rushing yards (480), receiving yards (655), receptions (57) and touchdowns (11). His 57 receptions still stand as a school record for most catches by a running back in a season. He was named First Team All-American by The Football News for 1988. However, he may be best remembered for the 1988 game against Notre Dame when he scored a touchdown that was ruled it wasn't, something that is still debated over 30 years after the fact.  His 11 receptions (for 130 yards) that day against the Irish is the most ever in a game by a Miami running back.  He also caught 9 passes for 162 yards in the Canes come-from-behind victory at Michigan.

After his Hurricanes career was complete, he was named Most Valuable Player (MVP) of the Senior Bowl. Gary was a first-round draft pick (26th overall) of the Los Angeles Rams, and played 5 seasons in the NFL. He led the league in scoring with 15 touchdowns in 1990, and in 1992 ran for over 1,100 yards, and scored 10 touchdowns. His final season was with the Miami Dolphins in 1994.
​
An active entrepreneur, Cleveland is Chairman of Gary Holdings, Inc. an investment company that owns and operates such businesses as AMG Capital Group, Black Shopping Channel, and Healthway Shopping Network, and he has his own Radio/TV Talk Show, "The Cleveland Gary Show." ​