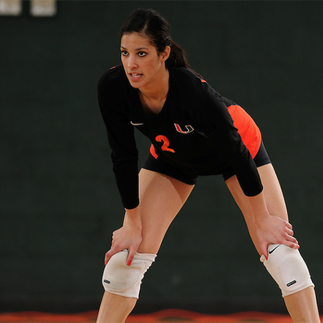 Lane Carico came to Miami all the way from the volleyball hotbed of Manhattan Beach, California. And during her career with the Hurricanes, she became one of the most honored student-athletes in school history.

As a senior, she was named the Atlantic Coast Conference (ACC) volleyball player of the year and the ACC volleyball scholar-athlete of the year, while being named to the American Volleyball Coaches Association (AVCA) Second Team All American squad.  Carico led Miami to back-to-back NCAA tournament appearances, and is still the school leader in kills and points. She was the first player in school history to amass both 1,000 kills and 1,000 digs in a career. Carico was named all-ACC four times, All-East Region First Team four times, and twice was named an honorable mention All-American.  She also was named the ACC Freshman of the Year in 2008.
​
After graduating Miami with a degree in Exercise Physiology, Carico completed her collegiate career playing sand volleyball at Georgia State University, where she was also an All-American.  She has since had a successful career on the professional beach volleyball circuit, winning her first AVP tournament in 2016.