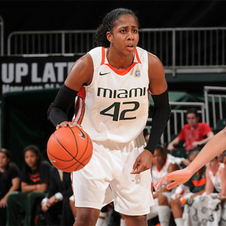 In her 4-year career at Miami, Shenise Johnson established herself as a legendary Hurricane and one of one of the top players in the nation. Recruited to Miami from Rochester, New York by UM Sports Hall of Fame coach Katie Meier, Johnson helped the program make monumental strides after a 2-12 ACC record in her freshman year. Johnson subsequently led the Hurricanes to back-to-back NCAA tournaments, and helped the program achieve a #5 national ranking - the highest in school history.

At Miami, Johnson became the only player in UM history to score both 2,000 career points and record 1,000 career rebounds.  Her name is all over the Miami record book - first all-time in steals, second in rebounding, third in scoring, and fourth in assists.  Twice, Johnson was named an Associated Press All-American, and in 2011 was named ACC Player of the Year.
​
After her stellar Hurricanes career ended, Johnson was picked by the San Antonio Stars with the 5th overall selection in the WNBA Draft - the highest a Miami player has ever been taken.  She played for three WNBA teams in her 9-year professional career, and in 2016 led the league in free throw percentage.  Today, she’s back at Miami as an assistant coach for Coach Meier’s Hurricanes.