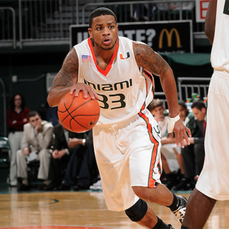 Jack McClinton will be remembered as one of the greatest long-distance shooters in Hurricanes basketball history. He came to Miami as a transfer from Sienna College, and in three seasons, he established himself as a scoring threat from anywhere on the court.

In his first season with the Hurricanes, McClinton scored 38 points in the NCAA tournament against St. Mary’s, most in school history. He still ranks first in Atlantic Coast Conference (ACC) history with a 44 percent 3-point shooting percentage, and second with a 90 percent free-throw percentage.  In 2008, McClinton connected on 7 three-pointers vs. Virginia, the third most in a game at Miami. Today, he ranks 7th in school history with 1,702 points.  He was named All-ACC First Team in back-to-back seasons in 2008 and 2009, as well as Third Team (2007), and also was named an ACC All-Academic Team selection in all three years he spent at Miami. His #33 jersey number was retired by the basketball program and hangs in the rafters of the Watsco Center.
​
After his Hurricanes career ended, McClinton went on to play internationally for teams in Israel, Turkey and Ukraine. Today, Jack owns Active Dreamers, an innovative sports merchandise and home decor brand designed to inspire youth to go after their dreams.