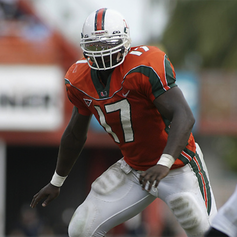 D.J. Williams was one of the many dependable and quietly sensational players on the great Hurricanes teams of 20 years ago. He came to Miami from California, where he was ranked as the top defensive player in the nation coming out of high school.  But in his freshman season, he contributed as a fullback for Miami - and caught 12 passes while scoring two touchdowns. It was in his sophomore season of 2001 that Williams switched back to linebacker – and he became one of the great defensive players in Hurricanes history. He recorded 51 tackles (25 solo), as Miami completed an undefeated season, winning the National Championship in the Rose Bowl against Nebraska with Williams contributing a crucial fumble recovery.

Williams continued his outstanding play in 2002, as he made 108 tackles, earning Second-Team All-BIG EAST honors, and he was a semifinalist for the Butkus Award, given annually to the top collegiate linebacker.  In his 2003 senior season, he was once again a semifinalist for the Butkus Award, was named First-Team All-BIG EAST, and was an Associated Press (AP) Third-Team All-American after finishing second on the team with 82 tackles (44 solo).  Ever the "team player", his contributions went beyond defense - also starring on special teams whenever needed.
​
Williams was selected in the first round (17th overall) of the 2004 NFL draft by the Denver Broncos, and went on to an 11-year NFL career.  In 2007 he finished second in the league with 141 tackles (106 solo).  He spent 9 years in Denver and 2 with the Chicago Bears.  D.J. is the founder of the clothing line Dyme Life.