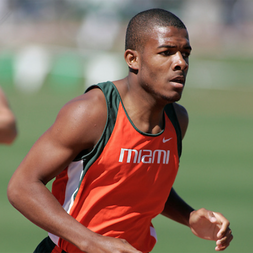 Tim Harris Jr. was one of the most dominant track and field athletes in University of Miami, or Atlantic Coast Conference history - running the 800-meters event like no one before him – or after.

Harris came to Miami in 2004 to compete for Hall of Fame coach Amy Deem, and in his career, he was a four-time NCAA All-American in the 800-meter event - while also becoming a six-time champion in the ACC when combining his indoor and outdoor victories. Harris is one of only two runners to win six titles in the 800-meters in ACC history. Today, his achievements still have not been topped at Miami - he still owns the Hurricanes school record in the 800-meter event.
​
Harris has since followed in the footsteps of his father, legendary football coach Tim “Ice” Harris. He coached Miami’s Booker T. Washington high school football team to the Florida 4A state championship in 2014, as well as leading the Tornadoes track team to the 2014 2A state title. Today, he is co-offensive coordinator and running backs coach for the football team at the University of Central Florida Knights in Orlando.