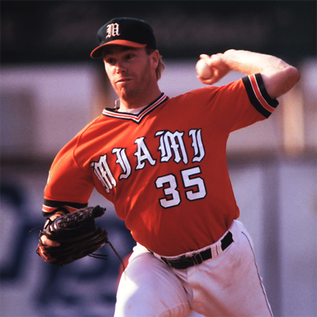 The Columbus, Ohio native came to Miami by way of San Jose, California. After biding his time on a Canes pitching staff loaded with arms, he showed the Hurricane coaches what he had as sophomore middle reliever in the 1990 NCAA Regionals. Alkire saved the staff's arms with a 5-inning relief appearance against The Citadel, then came back 40 minutes later to throw a complete game, do-or-die victory over NC State to send the Canes to the regional final. As a junior in 1991, he made the most of his first starting rotation opportunity, where as the Sunday starter, he won 10 games against just 2 defeats with a 2.65 earned run average (ERA) for UM Sports Hall of Fame member Coach Ron Fraser's squad.

As a senior in 1992, Jeff was the Opening Night starter on the preseason top-ranked team in the country. The lefthander posted one of the greatest seasons in UM history, recording 14 wins against just 3 losses, with an ERA of 2.62. The workhorse for the staff, he struck out 121 batters in 130 innings and had 4 complete games, including the clinching win over Notre Dame in the Atlantic Regional final at Mark Light Stadium.  Alkire’s pitching helped the Hurricanes advance to the 1992 College World Series, where they fell one win short of the national title game in Coach Fraser's final season.

His amazing senior season earned Alkire recognition as a consensus first-team All-American by the American Baseball Coaches Association, Baseball America, Collegiate Baseball magazine, and the Sporting News. Later that year, he became an Olympian - representing the USA at the 1992 Summer Olympic Games in Barcelona, Spain - on a team led by Coach Fraser and featuring UM Sports Hall of Fame member Charles Johnson.
​
Alkire finished his 4-year career at Miami with 32 wins against just 6 defeats, with a 2.56 ERA. Those wins are still the 9th most in school history. Jeff graduated Miami with a Bachelor's Degree in Business Administration, Management and Operations.