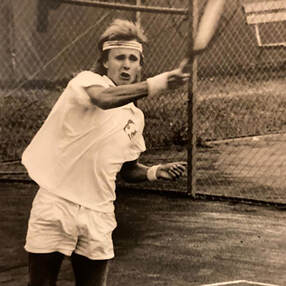 Conny Falk was a tennis prodigy at a young age in Sweden - playing junior matches with some of the greats of the game, such as Mats Wilander and Stefan Edberg. Falk played on the ATP tour after high school while his friend and fellow countryman Johan Donar played for the Hurricanes ...and that's where one of the most unusual stories in Hurricane athletic history begins.  In 1988, Falk came to Miami on "holiday" from Sweden to visit Donar.  Hurricanes Coach and UM Sports Hall of Fame member John Hammill happened to have a scholarship open when another student-athlete decided not to come to Miami and offered it to Conny.  Donar encouraged him to join the team and thus began the career of one of Miami's finest tennis players ever.

In three seasons at Miami, Falk posted 105 career victories, the second most by a men's tennis player in school history.  In his second year, he finished ranked 5th in the country, after making it to the semifinals of the NCAA tournament.  Falk was even better in his final season, winning the Minnesota national indoor event, and was ranked #1 in the country overall – the first time in school history a Miami player, male or female, had achieved that status.  He was named an All-American all three years he played for the Hurricanes.
​
Falk played on the ATP tour after leaving Coral Gables, and today lives in his native Sweden, where he earned a senior championship in the over-35 age group. ​