Welcome to the UM Sports Hall of Fame 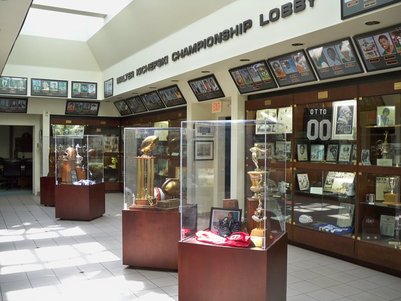 It places on record forever the names and achievements of the men and women who have brought National and International acclaim to their University through athletics and who, after graduation, have gone on to bring further credit to their school, their communities and themselves by the manner in which they have assumed their responsibilities as citizens.

The showcase for the Hall of Fame and repository of the great sports traditions of the University of Miami is the Tom Kearns Sports Hall of Fame Building, next door to the Hecht Athletic Center, 5821 San Amaro Drive, Coral Gables, Florida 33146.

Photos of each of the inductees, displays for each of the five football National Championships, along with a basketball and memorabilia from the Rick Barry years are on display, along with memorabilia from all sports. The Hall is the repository for all of the great traditions of the University of Miami. On display is the Seminole War Canoe which was for many years the prize for the winner of the University of Miami vs. Florida Football games. The Trophies for all of the University's Bowl Appearances are on display from the Palm Bowl (The first and original Orange Bowl) through this years bowl game. The unusual is also on display, including a picture of the University's first collegiate national championship team, the 1948 National Collegiate Polo Championship Team.

The Sports Hall of Fame, although affiliated with the University of Miami, is an independent Non-Profit Organization surviving on contributions and fund raising events such as it's Annual Golf Classic, along with our Celebrity Fishing and Bowling tournaments. Tax deductible donations help us keep the Hall of Fame doors open free to the public.
PRESIDENT MEAD McCABE, Jr.
Mead McCabe became President of the Hall in May 2021, continuing his 10 years of volunteer work for the Hall while serving on its general committee and board of directors.  Mead is a native Miamian and a lifelong Canes fan, with deep family ties to UM.  He received his MBA from UM’s School of Business, his father earned his Ph.D. from UM’s School of Medicine and was a longtime medical researcher and professor at UM’s Medical School, and Mead’s wife, Judy Pantoja-McCabe, earned her B.S. in business from the U, as well.

Mead is a serial entrepreneur with over 25 years of hands-on, results oriented leadership in life science, medical device and technology companies, including building two companies from start-up.  Mead is currently the CEO of the Buoniconti Group, a consulting firm specializing in cause marketing programs.  Prior to the Buoniconti Group, Mead was the co-founder and president of RevDia Corp. a medical diagnostic device company. Prior to RevDia, he was the co-founder and CEO of Genetic Vectors, a publicly traded genetics and industrial biotech company built from a UM tech transfer startup to a leading player in the early days of personalized medicine.

Outside of Canes’ games and Hall of Fame events, Mead and his family love to be outdoors and on the water enjoying their hometown’s unique beauty through boating, fishing, diving and windsurfing.
​ 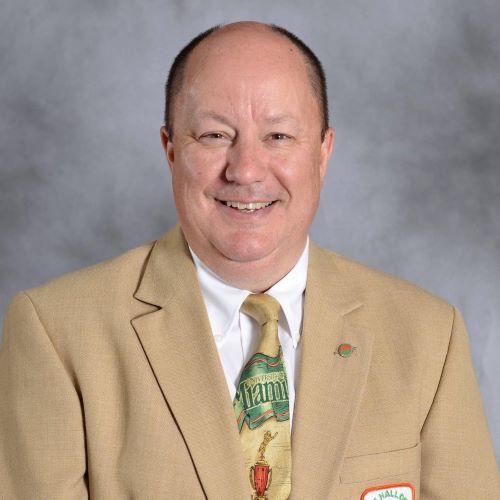 John became the UMSHoF's first ever Executive Director in October, 2009.  His duties include day-to-day operations of the Tom Kearns Sports Hall of Fame Building on the Coral Gables campus, fundraising, curating the items donated to the Hall, as well as working with the various committees to organize the Hall's four major events...the induction banquet, golf, bowling and fishing tournaments.

Prior to his duties with the Hall, John performed as a professional mascot for nearly 25 years.  A 1982 graduate of the University of South Carolina where he performed as Cocky, he was brought to Miami by legendary baseball Coach Ron Fraser to perform as The Miami Maniac mascot for baseball (1983-1993) and later Sebastian the Ibis (1984-1992), then went on to work as Billy the Marlin (1993-2002) for the Florida Marlins. Named an Honorary Alumnus of the University of Miami in 1988, he was tapped into Iron Arrow, the highest honor one can attain at the university, in 1990.
​

​
Brief History of the UM Sports Hall of Fame:

The University of Miami Sports Hall of Fame (“The Hall”) was formed in 1966 by a group of Dade County Judges to honor the finest student-athletes, coaches, and administrators that have represented the University. The Hall is an independent, Florida Not-for-Profit 501(C)(3) entity (Hall of Fame Committee of U.M., Inc.) and is located in the Tom Kearns Sports Hall of Fame building, on the UM campus, immediately next door to the Hecht Athletic Center. The funding for the building came from funds independently raised by The Hall from its members and supporters. The physical structure is owned and maintained by the University of Miami for the mutual benefit of the University and The Hall, while the interior is controlled by The Hall and showcases the accomplishments of its members, which, in turn, reflects the proud historical traditions of University of Miami athletics. It opened in September 1989.

The first induction banquet was held in 1967 and to date, with the Class of 2023, The Hall will have inducted 354 of the finest student-athletes, coaches, and administrators to have ever represented the University of Miami. Student-athlete candidates are eligible ten (10) years after their final year of competition, while coaches and administrators are eligible after serving at the university for ten (10) years.

The Hall is governed by a volunteer Board of Directors, overseen by a Board of Voting Members, who are responsible for the financial stability of The Hall. The current officers of The Hall are Mead McCabe, President, Mike Ward, President-Elect, Mark Drobiarz, Vice President, and Maureen Piero, Secretary.  Among the twenty-nine (29) Presidents to have served The Hall are current Board members Chris Ball, Wally DiMarko, Ed Golden, Richard Horton, Tracy Kerdyk, Ken Lancaster, Gerard Loisel, and Jodi Appelbaum Steinbauer. The Hall's day-to-day operations are supervised by Executive Director John Routh.

The Hall is strictly a donor and event funded organization. With the support of UM Athletics, the Hall puts on four (4) major events each year, with its premier event being the UM Sports Hall of Fame Induction Banquet.

This year’s Banquet was held at the DoubleTree by Hilton Miami Airport Convention Center and honored the Class of 2020, as well as the Class of 2022[1]. Video highlights of each inductee’s career are produced and shown at the event, with each inductee receiving a Hall of Fame jacket, a plaque, and a Hall of Fame ring, and an opportunity to say “thank you” to their friends, families, and supporters.

The 30th Annual Hall of Fame Golf Tournament, hosted by Alex Santos, which is sponsored in partnership with the Hurricane Club, was held at the Biltmore Golf Course on October 20, 2022.

The Hall of Fame Fishing Tournament, which has been held eleven (11) times in either the Florida Keys or in Miami-Dade County, was held June 16th-June 18th with the Kickoff Party at the Knight Sports Complex.  Saturday, June 18th's weigh-in and awards dinner was held at the Biscayne Bay Yacht Club (2540 S. Bayshore Drive)

The 12th Annual Hall of Fame Bowling Tournament will be held on Monday, February 27th, 2023. Last year’s event included bowlers and celebrity bowlers at various nationwide geographical locations and is planned for a similar format this year. Go to CanesBowl.com for more information or click the EVENTS button above.