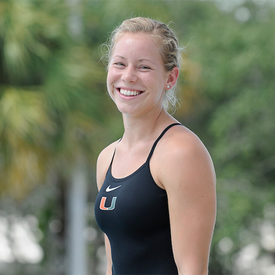 Brittany Viola is another in a long line of outstanding divers at the University of Miami. Coached by UM Sports Hall of Fame member Randy Ableman, Viola was a four-time All-American for the Hurricanes.  Born in Minnesota but growing up near Orlando, Brittany originally trained in gymnastics before turning her attention to diving, just missing out on the 2004 U.S. Olympic team while still in high school.

At Miami in 2007, she was named Atlantic Coast Conference (ACC) Freshman Diver of the Year, and as a sophomore, she swept the 2008 ACC championships, winning titles on the 1-meter, 3-meter, and the platform.  Brittany went on to win the 2008 (NCAA) Platform National Championship, and was named an alternate for the U.S. Olympic diving team. She bounced back after suffering foot injuries to win a second (NCAA) National Championship in Platform diving as a 5th-year senior in 2011.  That year she also achieved first place at the AT&T National Diving Championships, and the Winter National Championships for USA Diving.  In 2012, after taking first place at the U.S. Olympic Team Trials, she competed as a member of the United States Diving team at the London Olympic Games.
​
While an undergraduate, Brittany served on the Student-Athlete Advisory Committee (SAAC), including serving one year as its Chair.  The daughter of former major league baseball pitcher Frank Viola, she received her Bachelor of Science in Electronic Media and Sports Administration from UM.