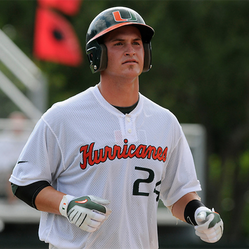 Excelling on both offense and defense, Yasmani Grandal established himself as one of the finest catchers in University of Miami baseball history during his three seasons in Coral Gables.  A native of Havana Cuba, Grandal came to the United States at the age of 10, and was ranked as the 19th-best prospect in the nation while attending Miami Springs High School.

At Miami, Grandal was the Hurricanes’ starting catcher for three seasons.  In his junior season of 2010, Grandal batted .401 with 15 home runs and 60 RBIs.  He also had an impressive .721 slugging percentage in 62 games played.  That season, Grandal was named the Atlantic Coast Conference Player of the Year and was a consensus First Team All-American, having been selected by Collegiate Baseball, Baseball America, and the American Baseball Coaches Association. He was awarded the Rawlings Gold Glove Award for catchers, finished second for the Golden Spikes Award behind Bryce Harper, and was also a finalist for the Johnny Bench Award as the nation's best catcher, and for the Dick Howser Award.

Grandal was picked with the 12th overall selection in the 2010 Major League Baseball draft, and is in his 11th Major League season, with 141 home runs, and 416 RBIs.  He is currently with the American League’s Chicago White Sox.  ​