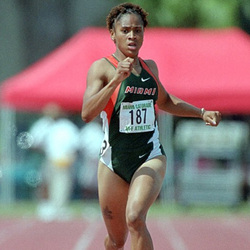 As a senior at Miami Northwestern High School, Wyllesheia Myrick was a true student-athlete. As a student, Myrick was named to the Honor Roll and selected to "Who's Who Among High School Students," and as an athlete she earned two letters in basketball and won "Track and Field Athlete of the Year" honors from The Miami Herald. Miami Director of Track and Field and UMSHoF member Amy Deem was looking for that all-around performance from Wyllesheia in Coral Gables, something she received, and more.

In her freshman season in 1998, Myrick was named a USA Track & Field Junior All-American in the 100 and 200-meters and was the only newcomer on the 4x100-meter relay team that captured the BIG EAST outdoor title with a meet record time of 45.09. Wyllesheia claimed All-American honors by placing 9th in the 200-meters (23.41) at the NCAA Championships. Her sophomore year in 1999 was even better, helping establish two school records with the indoor and outdoor 4x100-meter relays and recorded the team's fastest times in the 100-meters, 200-meters and 400-meters, and giving a glimpse of what was yet to come. Her breakout year was as a junior in 2000 when Myrick won All-American honors in the 200-meters and established school indoor records in the 55-meters (6.90), 60-meters (7.44) and 200-meters (23.69) as well as outdoor records in the 200-meters (23.14), 400-meters (54.20) and 4X400 meter relay (3:34.19). She won the BIG EAST Indoor 200-meter title with her school record effort, and was named the BIG EAST Outstanding Track Performer of the Year after taking first place in in both the 100-meters (11.30) and 200-meters (23.23), setting a BIG EAST Championship record in the latter. She was also named the US Track Coaches Association South Region Outdoor Athlete of the Year.

Wyllesheia redshirted in 2001 while recovering from a torn tendon in her hip, but came back strong as a senior in 2002, winning her fifth overall BIG EAST championship by claiming the outdoor 200-meter race. She became an All-American for the second time by placing 6th in the 100-meters (11.72) at the NCAA Championships. She was the first Hurricane women's track athlete to earn All-American honors in two different events at the NCAA Outdoor Championships. Overall, Myrick was a two-time All-American, five-time BIG EAST Champion and left Miami with school records in the indoor 55-meters, 60-meters and 200-meters, along with the outdoor 200-meters, and was a member of the 4x400 relay team that owned the school's top four performances. She was instrumental in helping Coach Deem and the Hurricanes claim four BIG EAST Outdoor Championships team titles.

After graduating Miami with a Bachelor of Business Administration in Sports Management degree in 2001, Wyllesheia competed in international meets and has taught and coached track in both high school and college, including a stint at her alma mater. Myrick currently is a part-time coach at FIU.