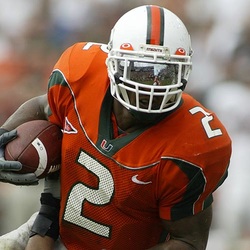 Willis McGahee came out of Miami Central High as one of the top running backs in the nation and ranked #1 in Florida. He followed in the footsteps of two of the greatest runners in Canes history, UMSHoF members Edgerrin James and Clinton Portis. When his name was called, McGahee was more than able to fill those shoes.

He redshirted in 2000, then made a memorable debut with 77 yards on 17 carries in Miami’s 2001 opening 33-7 victory at Penn State and spent that season as a valuable backup to Portis while the Canes rolled to their fifth National Championship. He was waiting for his chance to bust out, and bust out he did in 2002, putting together arguably the best season ever by a Miami running back.
Willis saw limited action in the season-opening blowout of Florida A&M, but he busted out with 204 yards on 24 carries in a 41-16 win over the rival Florida Gators. As the Canes rolled through the season undefeated and on its way to a second consecutive title game appearance, Willis led the way with a school record ten 100-yard rushing games. He saved his best for last, rushing for 205 yards on a UM record-tying 39 carries, and scoring a school record SIX touchdowns against Virginia Tech to send Miami to the Fiesta Bowl.

For the 2002 season, McGahee turned in six school records, including 1,753 yards on 282 carries and scoring 28 touchdowns, the third most in a season in NCAA history. He was named a consensus All-American, Big East Co-Offensive Player of the Year (with UMSHoF member Ken Dorsey), First Team All-Big East and was a finalist for the Doak Walker Award for the nation’s best running back, the Walter Camp Player of the Year and the Heisman Trophy. He ended his Miami career with 2,067 yards and 31 touchdowns.