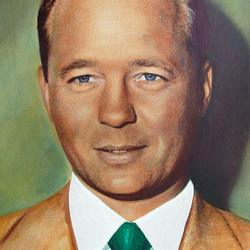 If you want to know how tough William "Bunny" Lovett was, think about this, in WWII he flew 47 bombing missions with the 15th Air Force.

Lovett came to Miami from Welch, West Virginia in 1936 and promptly won the Golden Gloves championship. He was coach Billy Regan's type of man and he was the mainstay of Regan's University of Miami varsity teams in 1938, 1939 and 1940. Bunny fought in the 118 pound division and never lost a match in a dual meet in his three years as a Hurricane, despite the fact the the University of Miami was battling such national colligate boxing powers as the University of Wisconsin, Tennessee, Clemson, Syracuse, Florida, Michigan State, Virginia and Maryland. He dropped a close decision in the NCAA championship to the man who won the division title. Lovett was also team captain his junior and senior years and the 1940 team is rated as one of the greatest ever to box for the Hurricanes.

Lovett was assistant coach to Regan from 1949 to 1956, when boxing was dropped as an intercollegiate sport at UM. He was also elected to ODK, the National Honor Society and served as President of the UM Alumni Association. Bunny served as a boxing judge for the Miami Beach Boxing Commission for 20 years and judged the Liston-Clay championship bout. If you were ever lucky enough to bloody Bunny Lovett, he would bleed Orange, Green and White.