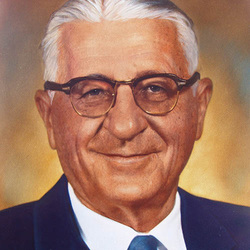 The following was written for the 1981 UMSHoF Induction Banquet program:


The name Wilbert Bach always seems to pop up when it comes to sports journalism in Metropolitan Miami.
He has been associated with University of Miami's Sports Department for a long, long period extending back to the early days of the school in 1935 and right up to today.  He's also a former sports editor of two local daily newspapers, while he published magazines and served as publications editor for a utilizes company here.
Uncle Wilbert, as he was known in the earlier days of sports in this deep southerly city, is a writer, editor and statistician.  And for extra measure, toss in public address sports announcing.
For nearly 45 years, Wilbert Bach has teamed with Sports Information Director George Gallet in publicizing UM sports.  Together, they have made the school known not only nationwide, but worldwide.
Along with his UM Sports Publicity Department writing and reporting, Wilbert is chief statistician for all Hurricane sports, handling stats and records on UM teams for the NCAA and news media.  A few years ago he was public address announcer at the Orange Bowl Stadium, announcing not only University of Miami football games, but the New Year's Orange Bowl Classic, Miami Dolphin and high school grid clashes.
When calling games on the public address, Bach was a rarity in collegiate sports.  He simultaneously made game statistics and handled two different public address systems, one for the fans, the other for the press box.  He's believed to be one of the rare few ever to perform this feat.  Bach is still the official statistician for the annual New Year's day Orange Bowl Classic.
Way back during the roaring 20's and later, Wilbert had many journalistic accomplishments.  He was the sports editor of the Miami Herald 1922 through 1924, sports editor of the Miami tribune 1925 and 1926, served as an early director of the Miami Beach News Bureau, published (along with his wife Margaret) a Miami Beach magazine known as Society Pictorial and was editor of publications for the Florida Power and Light Company 1935 through 1966.
Wilbert has been mixed up in everything from soup to nuts in the world of journalism.  You name it, Wilbert has done it.