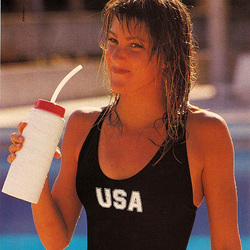 Wendy grew up in St. Louis, Missouri, and who could have envisioned that the baby bouncing and laughing on the trampoline would grow up to be an  Olympic Diving Medalist? The youngest of four daughters of a diving coach, she began competing in Age 10 and Under competitions at age 4! After going undefeated in high school, garnering All-American honors three times, she  moved to California to train under coach Scott Reich. Wendy came to Miami via Mission Viejo as one of the top recruits in the country, and, like Greg Louganis before her, quickly became the face of Hurricane Diving.

With high expectations, Wendy did not disappoint, finishing 2nd in 3-meter boards at the NCAA Championships as a Freshman, but the best was yet to come! She would become a 3 Time All-American, 5 Time U.S. National Champion and a 7 Time NCAA Finalist. In 1989, she won the 10 meter platform title at the NCAA Swimming and Diving Championships in Indianapolis. In the same meet, she also placed 3rd in both the 1 meter and 3 meter springboards, and was voted the 1989 NCAA Diver of the Year by the National Swimming Coaches of America.

In international competitions, she was just as impressive. Wendy won the Bronze Medal in 10 meter platform diving at the 1988 Summer Olympics in Seoul, South Korea.  She was the 1989 World Cup Champion, won a Bronze Medal in 10 meter platform at the 1991 World Championships, and was a finalist for the 1989 Sullivan Award, given to the Best Amateur Athlete in the United States.

Although she left U.M. to pursue a career in modeling and to train for the 1992 Olympics, Wendy came back and earned her degree in Psychology. She was recognized as one of St. Louis' Top 100 Athletes of the 20th Century. From 2000-2006, she served as National Spokesperson for the Motions in Mind Depression Awareness Campaign, sponsored by the Women's Sports Foundation, that reached over 75 million people about depression and treatment options.  She is married to Jaime Champion and they live in Nellysford, Virginia.