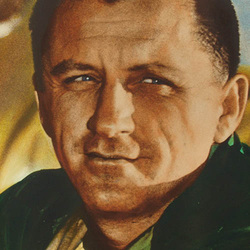 Walt Kichefski was born in Rhinelander, Wisconsin and came to Miami in the mid 1930's and would become one of the university's most recognizable figures for over 50 years.

He played two-way end in 1936, '38 and '39, serving as captain and making honorable mention All-America during his brilliant senior year.  Following graduation, Kichefski played professional football for the Pittsburgh Steelers.  In 1943, he entered the coaching field at the University of Miami as line mentor, then played with the pros once more in 1944, before rejoining the Hurricane coaching staff to help drill the team which won the Orange Bowl Classic over Holy Cross, Jan. 1, 1946, the thrilling game the Hurricanes won after the final gun had sounded.

Walt handled many coaching and other duties for the Hurricanes: end coach 1946-57, offensive line coach, 1958, assistant head coach to Andy Gustafson, 1959-63, administrative assistant and defensive end coach under Charlie Tate, 1964 through Miami's fist two games in 1970, interim head coach and acting athletic director following Tate's resignation, and defensive end coach under Fran Curci, 1971-72.  He also served as Director of Recreation for the University's South Campus.
During his 30 years of coaching Hurricane pigskinners, Kichefski gained a brilliant reputation as one of America's foremost end mentors.  Four of his pupils, Ted Hendricks, Bill Miller, Frank McDonald and Ed Weisacosky became All-Americans.  Hendricks was one of the rare few in the United States ever to receive the award three consecutive years, while Miller was a two-time All-American.

The jovial Kichefski became assistant athletic director after retiring from coaching in 1972, and served as Director of the Athletic Federation, the forerunner to The Hurricane Club.  He was the main liaison between the University and various groups at the school, including the Hall of Fame, the Gridders Club, the "M" Club and other campus organizations.

Known as "The Gator Hater", Kichefski was inducted into the UM Sports Hall of Fame in 1969.