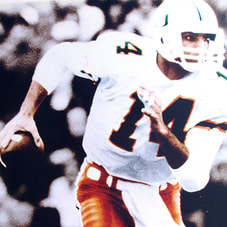 Vinny Testaverde came to the Hurricanes by way of Elmont, New York in the fall of 1982.  Vinny was the first player in U.M. history to win the Heisman Trophy, 1986.  Vinny is one of only a handful of Hurricane football players to have his number retired (14).

On the career lists Vinny ranked, at the time, second in passing yardage, (6,058), tied with Steve Walsh for first in touchdown passes (48) and forth in pass completions (413).  In addition to winning the Heisman Trophy, he also won the Davey O'Brien Award, the Walter Camp Player of the Year Award, the Maxwell Award and was voted a consensus first-team All-American.  As a starter, Vinny led the Hurricanes to a 21-1 regular season mark over two years.

Vinny was the U.M. leader in career passing efficiency (152.80) and the single-season pass completion percentage (63.4%) in 1986, completed 21 of 28 passes for 261 yards and four touchdowns in Miami's 28-16 win over No. 1 ranked Oklahoma at the Orange Bowl during the 1986 season.  He also led Miami to back-to-back New Year's Day bowl games, the 1986 Sugar Bowl and the 1987 Fiesta Bowl.  Vinny was also voted the Jack Harding team MVP award  in both his junior and senior season.

Testaverde was selected the first pick in the 1987 NFL draft by the Tampa Bay Buccaneers and played on several other NFL teams during his long, and successful, career.