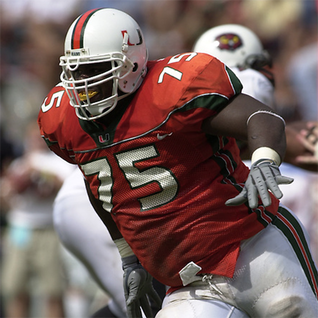 Vince Wilfork came to Coral Gables after a stellar athletic career at Santaluces High School in Lantana, Florida.  A Super-Prep All-American and second team USA Today All-American in football, he also was state runner-up in the shot put and discus.

One of just 4 true freshmen to see extensive playing time for the Hurricanes during the 2001 National Championship season, Wilfork proved to be one of the most disruptive defensive players in the Miami arsenal as the season progressed, finishing with 41 tackles and 15 quarterback hurries.

During the 2002 season, Vince had 43 tackles and 7 sacks.  Before the 2003 season, he was named a pre-season All-American and was voted the No. 2 defensive tackle in the country by The Sporting News.  Though he was sometimes double- and tripled-teamed, he did not disappoint in his third and final year at The U, totaling 64 tackles with a team-leading 20 quarterback hurries, 11.5 tackles for loss, 6 sacks, and was named first team All-Big East.

But Wilfork’s success in football didn’t come without having to overcome great hardship.  In December of 2002, just as Miami was preparing for their second consecutive National Championship game, his mother passed away, only six months after his father’s passing.  Vince credits two people, UMSHoF member Greg Mark, then the Miami defensive line coach, for giving him perspective on life and not letting him quit, and his wife, Bianca, who reminded Vince that his parents always wanted success for him, because he always wanted it for himself.  He also thanks his teammates for supporting him through it all …with so much love and support from his U Family, he wanted to make his parents and U brothers proud of him.

Vince and Bianca live in Houston with their three children; D’Aundre, Destiny, and David, and he is enjoying retirement by coaching baseball and spending time with his family.