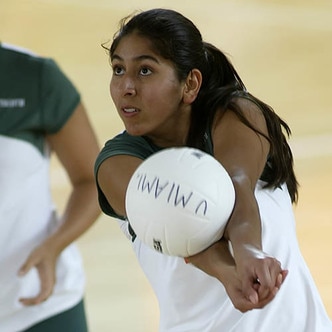 One of the most honored players ever from the Miami program, Valeria Tipiana continues to make UM history this evening as the FIRST inductee into the UMSHoF from the sport of volleyball. She came to Miami from her native Lima, Peru, where she was a member of the Peruvian National Volleyball Team. Quickly becoming adjusted to the American collegiate game, Valeria started 22 of 24 matches in her freshman year of 2001, which also marked Miami volleyball’s return to competition for the rst time in two decades, discontinued after the 1981 season.

Valeria would go on to make her mark on the UM record books and in two different conferences. As a sophomore, Tipiana was named the 2002 Big East Player of the Year. She was the only unanimous First Team All-Big East selection in leading the Hurricanes to the NCAA tournament in only the school’s second year of resumed competition and first in the conference. The Canes finished ranked No. 23 and won a school record 27 matches, including beating Duke and No. 15 Wisconsin in Madison to advance to the Sweet 16. That season, Tipania was named the Most
Valuable Player of the Wichita State Invitational and the FIU Fall Classic.

In 2003, Valeria was named Second Team All-Big East and was the MVP of the Hurricane Invitational. She was then named a First Team All-ACC selection when the Canes made the move to their current conference in 2004. That year, she became the rst Hurricane to be named an American Volleyball Coaches Association (AVCA) honorable mention All-American. Tipiana was the rst UM player to pass 1,000 career kills and is still in the Top 3 in career points, kills, service aces, and digs. Her career numbers might be even higher, but the 2004 campaign was shortened by three tropical hurricane storms that canceled two tournaments and a couple of matches, which also prevented the Canes from making the NCAA tournament.
​
A regular on the Dean’s List, Valeria graduated in 2005 with a Bachelor of Arts degree in Criminology. She would then play professionally for two years in Spain. Valeria and her husband, Matthew Staebler, have a young son, “Auggie,” and reside outside Charlotte, NC where she is a financial analyst for Pentair. “My time at The U is one of the best times in my life,” she said, “and I feel fortunate to have met so many wonderful people.”