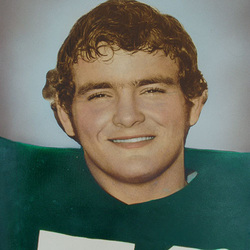 "He's the kind of middle guard (nose tackle) who makes you demote your center after he plays against him," said Baylor Head Coach Grant Teaff of ex-circus tightrope walker Tony Cristiani.  A Brandon, Florida native whose father owned the then-famous Cristiani and Wallace Circus, Tony began walking the tightrope at age six and traveled with the circus until high school.  It was at that point that Cristiani started his football career.  Taking advantage of his outstanding balance and speed, he quickly became one of the most sought after high school linemen in Florida.  The 5-9, 213-pound Cristiani accepted a scholarship to UM and stepped right in, starting all games his freshman year.

Cristiani led the South in sacks both his sophomore and junior seasons, notching 15 and 17 respectively.  Although he never led the team in tackles for any one season, Tony set the then-record for tackles by a middle guard with 259.

A two-time All-American selection on numerous teams in 1972 and 1973, Cristiani continued to baffle opposing coaches.  "Cristiani whipped everybody we put in front of him--I don't know anybody who blocked him all night," bemoaned former Houston Coach Bill Yeoman.  A three-year letterman, Cristiani is considered to be one of the best middle guards ever to come out of the University of Miami.