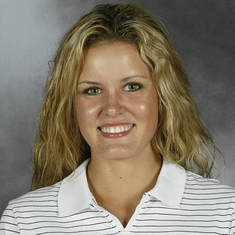 Legendary golfer Arnold Palmer once said, “Success in this game depends less on strength of body than strength of mind and character.”   It can be said that Tina Miller Lloyd possessed her share of both.  She competed four years on the BOYS TEAM at Archbishop Curley-Notre Dame High School in Miami and was named a first team All-Miami Dade County selection all four years.

That strength and success helped jumpstart her collegiate career as a freshman with six Top 10 finishes in the eight events she competed that year.  As a sophomore in 2002-2003, Tina would win her first tournament, the UCF Invitational, before pulling off one of the greatest comebacks in school history.  Trailing by five strokes with nine holes to play, she erased the deficit and would finish tied for Medalist honors at the inaugural Big East Golf Championship.

She started her junior campaign with a wire-to-wire victory in the (Charleston) Cougar Classic.  As a senior, she would claim victory three times, including the Florida Women’s Collegiate Championship.  For her career at Miami, Tina ranks first all-time in Top 10 finishes with 26.  Her eight Top 10 finishes as a junior is tied for second all-time. She won seven tournaments, second all-time to UMSHoF member Tracy Kerdyk’s 11 wins.  She is tied for the school record for the lowest single round score of 67.

After her Miami playing days, she competed professionally for three years on the Duramed Futures Tour and played with sponsor invitations at the LPGA Wendy’s Championship and Corning Classic, as well as two U.S. Women’s Opens.

Tina received a Bachelor of Arts in Studio Art Graphic Design and was tapped onto Iron Arrow; the highest honor one can attain at the University of Miami.  She currently works as Director of Social Media for NBC Sports-Golf Channel, and she and her husband, former NFL placekicker Rhys Lloyd, have three children: Aston James, John William II and Bryden Kent Lloyd.