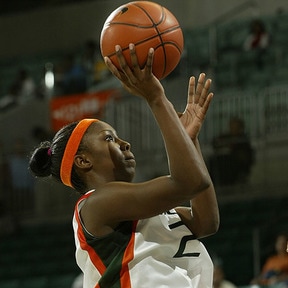 Tamara James was a standout guard at South Broward High School, garnering Nike, Gatorade and McDonald’s All- American honors. She was named the Florida Player of the Year in 2002 while leading her team to three consecutive state titles. From the moment she put on a Miami uniform, she made her mark on the Hurricane Basketball history books.

James recorded one of the best freshman seasons in UM history, becoming the only rookie in Big East history to lead the league in scoring, with an average of 21 points per game. That ranked her 12th nationally as she scored in double figures in 30 of 31 games in the 2002-03 season, leading UMSHoF member Coach Fern Labati’s team to an NCAA Tournament berth. As a sophomore, she would be named First Team All-Big East while posting another league-high 16.6 points per game average.

With Miami’s move to the ACC in 2004-05, under new Coach Katie Meier, James became only the second player in NCAA history to lead two conferences in scoring, averaging 22.3 points per game, fifth-highest in the NCAA. She was named first team All-ACC and an honorable mention All-American by the Associated Press and WBCA/Kodak.

In her senior season, James led the ACC in scoring with an average of 21.5 points per game and help Miami earn a place in the WNIT Tournament. Having previously passed UMSHoF member Rick Barry’s men’s record of 2,298 points, Tamara became Miami Basketball’s all-time leading scorer when she surpassed UMSHoF member Maria Rivera’s women’s-record 2,358 points by tallying 32 against FIU.

For her career she finished with 2,406 points and holds records for most free throws attempted and made, is third in career free throw percentage (.783) and is sixth in steals. Her 20.4 points per game career average is 3rd best, trailing only Rivera and UMSHoF member Francis Savage. She was a three-time first team All-Conference selection and a three-time Associated Press honorable mention All-American.

Tamara was a first round pick (8th overall) by the Washington Mystics in the 2008 WNBA draft and played professionally for 9 years, mostly overseas in Turkey, Spain and Israel, helping her teams win 3 championships. She was selected to the ACC Women’s Basketball Legend Class of 2012. She graduated UM with a Bachelor of Arts degree and resides in Dania Beach with her son, Dion, where she devotes time to the Tamara James Foundation, striving to help build healthy, strong communities.