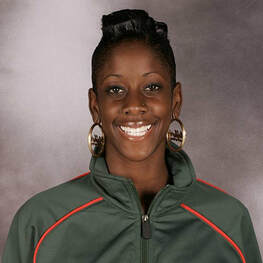 She graduated Miami in only three years with a Bachelor’s Degree in Psychology, with Honors, and recently started a fashion line and online store named Anisah by Tabia Charles.  She competed for her native Canada in the 2008 Beijing Olympics, finishing 10th in the Long Jump.  She is married to the love of her life, Dennison Charles, and they live in her hometown of Toronto with her stepson Dante and their young son D’Angelo.