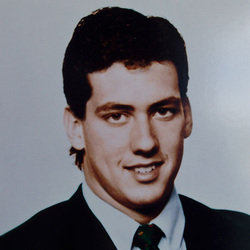 Steve Walsh is one of the long string of Hurricane signal callers, whose success from the early 80's into the 90's, helped Miami gain the nickname "Quarterback U".

He led the Hurricanes to its second national championship in 1987 by defeating the Oklahoma Sooners in the 1988 Orange Bowl Classic 20-14.  In his two years as starting QB, he compiled a 23-1 overall record.

As a junior, he was named first team All-American quarterback by the Associated Press, the Football Writers Association of America and ESPN, and was The Football News College Player of the Year.  He was fourth in the 1988 Heisman Trophy balloting.

Walsh finished his career at UM tied with Vinny Testaverde for 1st in TD passes thrown with 48, now 2nd.  He is currently 3rd in career completion percentage and in the Top Ten in pass attempts, completions, passing yards and total offense.  Steve and his 1988 offensive line hold the NCAA record for fewest sacks allowed with four.

Walsh was drafted in the first round of the NFL supplemental draft after his junior year by the Dallas Cowboys, he also played for the Tampa Bay Buccaneers and the Indianapolis Colts.  He was inducted into the University of Miami Football Ring of Honor on October 24, 2009