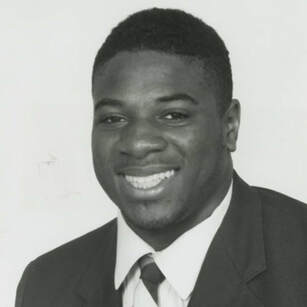 Some say it is better to be lucky than good.  For Stephen McGuire, being lucky led to his being good. The luck happened when he, as the New York “Newsday” High School Player of the Year, met UMSHoF member Coach Jimmy Johnson at a breakfast honoring Vinny Testaverde for winning the 1986 Heisman Trophy.  Johnson offered Stephen a scholarship without ever having seen him in uniform.  After a year at Fork Union Military Academy, the same prep school that led UMSHoF member Testaverde to Miami, McGuire made it to Coral Gables to help rewrite the record books.

After a redshirt season, McGuire burst onto the scene in 1989, rushing for 519 yards on 106 carries (4.9 yards per attempt) and scoring 10 touchdowns.  His best game was a 136-yard performance on just 14 carries (a 9.7 yard avg.), and three touchdowns against East Carolina.  He was named the Freshman of the Year and appeared on the cover of Sports Illustrated after Miami’s 27-10 dismantling of then-No. 1 Notre Dame in the Orange Bowl stadium that helped propel Miami to its third National Championship.

Stephen came back in 1990 with 621 yards rushing on 150 attempts (4.1 avg.) and 11 touchdowns, including 176 yards on 31 carries against rival Florida State.  Those 11 touchdowns were, at the time, the third-most in one season by a Hurricane player.  As a junior in 1991, he rushed for 608 yards on 123 carries (4.9 avg.). Again, he saved his best for the big game …rushing for 142 yards on 22 carries (6.5 avg.) and scoring the winning touchdown in the first “Wide Right” game against FSU, as Miami would later earn its fourth National Championship.  Stephen was hurt late in the ’91 season against Boston College and that injury would hamper his senior season in 1992, limiting his rushing total to 208 yards, though he did add 5 more touchdowns to his career total.

McGuire left Miami as the school’s second all-time leading rusher with 1,953 yards, trailing only UMSHoF member Ottis Anderson (3,331).  He still holds the school mark with 35 career rushing touchdowns  and is tied with UMSHoF member Edgerrin James with 35 career total touchdowns.  His 450 career rushing attempts is still eighth all-time.  Stephen has worked as a New York City police officer for 18 years and lives on Long Island with his wife, Ramona, and their three children: Stephen, Allainah and Michael.