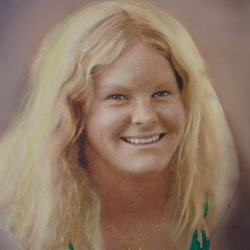 It's gotten to be the point in Women's Swimming that you don't have to be embarrassed anymore that you're swimming eight hours a day and that your hair is constantly wet.

Sharon began her swimming career when she was four years old in California.  At eleven, she swam under Coach George Haines, the former U.S. Olympic Coach, with the Santa Clara Swim Club.  She swam in the company of such greats as: Mark Spitz, Karen Moe and John Hencken.  One of Sharon's top achievements was to be a member of the 1973  800 yard Freestyle Relay that held the American record.

In 1973 she was the first of four outanding girls offered a swimming scholarship at the University of Miami.  Four hours a day, seven days a week for swimming practice was an average routine for Sharon.  It paid off as Sharon became a four-time All-American at UM!

Sharon was the first woman swimmer at the University of Miami to win two individual National Titles.  She was a member of the UM Women's team that won two National Championships; one in 1975 at  Arizona State and the other in 1976 in Ft. Lauderdale where UM was the host team.

To quote Sharon:  "In receiving the Athletic Scholarship at the University of Miami I was able to earn my degree and continue swimming at a high level of competition.  For this I will always be grateful."