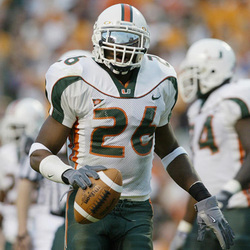 Sean Taylor lives on the hearts and minds of Hurricane fans as one of the greatest ever to wear the Orange, Green and White.  From humble beginnings the local product dazzled the Hurricane faithful – and football fans everywhere – with his athletic ability, reaching heights few achieve before his life ended tragically and far too soon.

At Miami's Gulliver Preparatory School, Sean led the Raiders to the 2000 Florida State 2A championship. He rushed for 1,300 yards and scored a state record 44 touchdowns, while making more than 100 tackles on defense.  The team finished with a 14-1 record, their only loss in a game where he did not play.  He also played basketball and ran track, winning the State 2A 100-meter dash as a senior.

In 2001, he was just one of four true-freshmen to play and made an impact on special teams with 26 tackles (20 solo), as the Hurricanes won their fifth national Championship. Starting in 2002 and replacing UMSHoF member and two-time consensus All-American Ed Reed, Sean proved a worthy replacement, named First Team All-Big East.  He was third on the team in tackles with 87 (53 solo), had 4 interceptions returned for 122 yards, and also returned a punt 78 yards for a touchdown against Pittsburgh.  Terrific statistics, but Sean was just preparing the football world for his breakout year.

As a junior in 2003, Taylor would lead the nation with 10 interceptions (returned 184 yards, second most in school history) to tie UMSHoF member Bennie Blades’ school record.  He set a UM record by returning 3 of those picks for touchdowns, and was once again third in tackles with 77 total (57 solo).  He was named the Big East Defensive Player of the Year, a finalist for the Jim Thorpe Award given to the nation's best defensive back, and was named a consensus All-American.  His 306 interception return yards and his 3 touchdowns on interceptions returned, are both second all-time at Miami behind only Ed Reed (389 yards and 4 TD's).  Sean is fifth all-time with 14 career interceptions, and his streak of interceptions in four consecutive games is second-longest in Canes history.  Taylor was also a member of the track team at UM.

In the 2004 NFL Draft, he was selected 5th overall by the Washington Redskins, one of a record six Hurricanes, including fellow 2015 UMSHoF inductee Jonathan Vilma, to be picked in the first round that year.  Sean played four years in the nation's capitol and developed a reputation as the hardest hitter in the league, so named by Sports Illustrated.  He was named to the Pro Bowl in 2006 and was leading the NFL in interceptions with 5 at the time of his death at the tender age of 24 in November 2007.

After his passing, Sean’s memory was honored in many ways around the sports world he touched.  The Redskins painted his number 21 on the field and many players wore his number to honor him.  He was voted, posthumously to his second Pro Bowl in December 2007 and the NFC lined up for the first play in the Pro Bowl with just one defensive back, as the Redskins had done in tribute in the game following his death.  In 2008, the Redskins enshrined him into their Ring of Honor at FedEx Field. Gulliver Prep renamed its football field “Sean Taylor Memorial Field” in 2009, and in 2012, he was named one of the 80 Greatest Redskins, along with UMSHoF members Don Bosseler and Clinton Portis, in honor of Washington's 80th year in the NFL.  His legacy lives on in his daughter, Jackie.