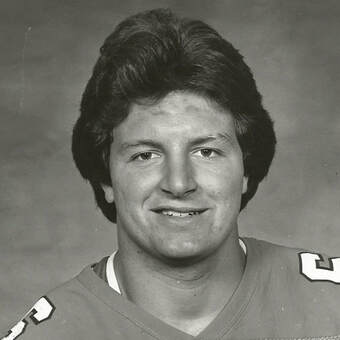 Scott Nicolas made a big splash on the UM scene from the start of his career.  And that was only appropriate since he came from Clearwater High in Clearwater, Florida, where he was All-State in football and was captain of both his senior-year football and basketball teams.

As a true freshman linebacker at Miami for Coach Lou Saban in 1978, Nicolas started three games and tallied 49 total tackles, the most by any rookie. And after UMSHoF member Coach Howard Schnellenberger and his new staff came to Miami, they took a liking to Scott early and in a sign of things to come, named him the Outstanding Player of 1979 Spring Football.

Nicolas would set a UM school single-game record with 26 total tackles against nationally-ranked Penn State in Miami’s 26-10 upset victory that had the country take notice of the program in Coral Gables.  He finished the 1979 campaign with 100 solo tackles and 149 total tackles, leading the defensive squad.  During the 1980 season, Scott led the team again with 133 total tackles (84 solo), including big games against Notre Dame (20 tackles), Mississippi State (19) and Penn State (18).  As a senior, he led the Canes defensive unit for the third consecutive year with 124 total tackles (81 solo).

For his Miami career, Nicolas tallied 456 total tackles, leaving the school as its all-time leading tackler (he’s still ranked #3).  His 307 solo stops was a school record that stood for 18 years until passed by UMSHoF member Dan Morgan.

Scott was selected in the 12th round (310th overall) of the 1982 NFL Draft by the Cleveland Browns.  He spent five seasons with the Browns, then two with the Miami Dolphins.  When his football career ended due to injury, he began working with Ed Mullinax of Mullinax Ford and today is a partner in the company.

Nicolas has been married 38 years to his high school sweetheart, Alicia, who worked for UM Athletic Director Dr. Harry Mallios and in Coach Schnellenberger’s office while a student at Miami.