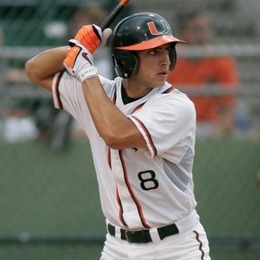 One of America’s top prep shortstops at Granada Hills H.S. in Los Angeles, Ryan Braun was offered athletic scholarships by Stanford University and the University of California, Berkeley. Instead, Braun chose to parlay his excellent grades into a full academic scholarship to the University of Miami, indicating he selected The U for “its academics, its athletics, and its social scene.”

At Miami in 2003, Braun was named “National Freshman of the Year” and a rst team “Freshman All-American” by Baseball America. He was also named rst team All-American by Collegiate Baseball and the Jewish Sports Review. He earned second team All-American honors from the National Collegiate Baseball Writers Association and the American Baseball Coaches Association. Braun led UM in batting average (.364), home runs (17) and broke UMSHoF member Pat Burrell’s freshman record with 76 RBI. As a sophomore in 2004 he was limited by a rib cage injury but still hit 10 home runs with 45 RBI in 45 games, including a .606 slugging average and a team- leading 21 stolen bases.

Braun had another outstanding season as a junior in 2005 for UMSHoF member Coach Jim Morris. He hit .396 with 18 home runs, 76 RBI and 23 stolen bases. He was named a nalist for the Golden Spikes Award as college baseball’s top player, was named the 2005 ACC Player of the Year, and an All-American by Baseball America.

A first-round pick of the Milwaukee Brewers in the 2005 Major League Baseball Draft, Ryan was named the 2007 National League Rookie of the Year and earned National League Most Valuable Player honors in 2011. He is a six-time MLB All Star, ve-time Silver Slugger Award winner and was the 2012 NL home run leader.