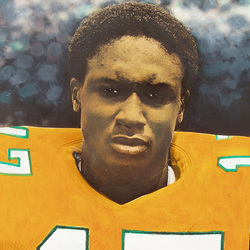 During the 1980's the University of Miami's football program took a significant turn in an upward direction. Though the talent on offense was a major key to this success, the Canes defense was not to be sold short. neither was Sebring, Florida native Ronnie Lippett was a three-year starter and letter-winner during his days at UM, and began the great tradition of defensive backs at Miami, including All-Americans Bennie Blades, Bubba McDowell, and Daryl Williams. His ten career interceptions still rank eighth on Miami's all-time list. He also finished with 49 tackles and three interceptions during his senior year. Among his greatest achievements was a 66-yard interception return in 1981 that helped set up Miami's winning score in a 21-20 victory over arch-rival Florida.

Lippett then extended his playing skills, as he spent eight seasons with the New England Patriots, where he snagged 24 interceptions from 1983-88 and from 1990-91. He received All-AFC second team honors in 1987 and started cornerback for the Patriots in Super Bowl XX against Chicago.

Ronnie's post football activities include counseling young persons and their families in the D.A.R.E. program and involvement in "Kids 4 Tomorrow", a program where former professional athletes speak to children in public and private schools. Always known for his speed, Ronnie presently owns his own business which is aptly named "Speedee Oil Change and Tune-Up".