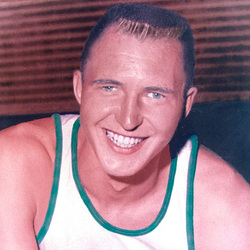 Playing alongside All-American Dick Hickox, Godfrey and the Canes received the school's FIRST ever NCAA tournament bid in 1960, finishing with a 23-4 mark.  Back then, only 16 teams made the Big Dance.  In 1961, they finished 20-7 and went to the NIT for the first time.

As a coach, Ron lead Hurricane teams to championships in the 1967 Hurricane Classic and the 1968 Marshall Tournament.  He also coached Don Curnutt to All-American honors in 1970.