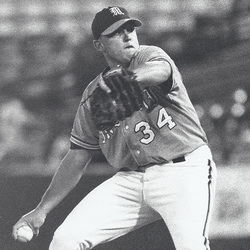 Robbie Morrison was one of the key factors during Miami's NCAA record streak of consecutive World Series appearances (1994-99).  He came to Coral Gables after claiming 3 straight team MVP honors for Wellington High School, as well as the school's Athlete of the Year (1995) and being named the top pitching prospect at the FCA Stars of Tomorrow Baseball Showcase.  He turned down an offer to play pro ball after being drafted by the Seattle Mariners.  Once he arrived on campus, UMSHoF member Coach Jim Morris knew who to give the ball to in clutch situations.

He holds the school career record for strikeout average per nine innings (13.9) with 237 strikeouts in 143 innings pitched. He is still currently third in career saves with 34.

Robbie was drafted in the 2nd round (47th overall) by the Kansas City Royals in the 1998 Major League Baseball draft.