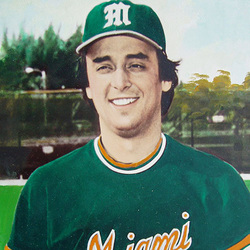 Ron Fraser called Randy Guerra "one of the most reliable and best to do it all players I ever coached". And do it all certainly describes Randy. He was a pitcher, an outfielder, a first baseman and designated hitter.

A native of New Jersey, Randy earned All-State basketball and baseball honors at Linden High School and he was also named to the All-Tri State, New York, New Jersey and Connecticut, by the New York Daily News. Following his great UM career Guerra played in the New York Yankees system.