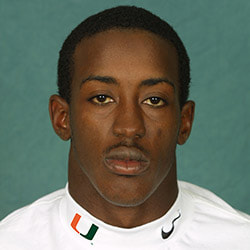 Phillip Buchanon will be remembered as one of the most dynamic defensive backs and exciting kick returners in University of Miami history.  A three-year star for the Hurricanes, Buchanon excelled in the secondary and when he got his hands on the ball, he was a threat to take it back all the way for a touchdown.  When his Hurricanes career was done, Buchanon had 88 tackles and seven interceptions on defense, including two that were returned for touchdowns, tied for 3rd most in school history.

Buchanon was just as thrilling as a return specialist.  In his Miami career, he returned 32 punts for 477 yards and two touchdowns, tied for 4th most at Miami.  In his junior season in 2001, he earned First Team All-American honors as a returner by ABC Sports, was a unanimous First Team All-BIG EAST selection and the conference's Special Teams Player of the Year, as well as a finalist for the Mosi Tatupu Award, presented to the nation’s top special teams player.

One of the fastest Hurricanes ever, Buchanon was also a star on the Miami track and field team, posting a personal best of 10.5 seconds in the 100 meters.  At the NFL combine, he ran a 4.31 in the 40-yard dash, tying for the fastest time among NFL prospects.  A first-round draft pick (17th overall) of the Oakland Raiders, Buchanon recorded 11 interceptions in his first 3 seasons in the league.  He ultimately played 10 seasons in the NFL, for 5 different teams.