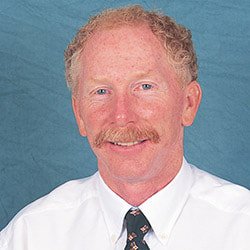 Few coaches in University of Miami history have tutored as many All-American and Hall of Fame athletes as Men's Track & Field coach Mike Ward.  Ward coached 16 years as both an assistant and head track & field coach -- and left a mark of greatness on the Hurricanes’ athletic program.

After six years as an assistant coach, Ward took over the men's head coaching job in 1997.  The results were immediate.  Ward coached UM Sports Hall of Fame member Davian Clarke to the NCAA National Championship in the 400 meters -- and in 1998 he was named BIG EAST coach of the year.  Ward also coached Hall of Fame member Ron Thorne, who was named BIG EAST track athlete of the year.  In his 11 years as head coach, Ward coached 30 BIG EAST and Atlantic Coast Conference (ACC) conference champions, and seven All-Americans, including Clarke, Thorne, and 2022 UM Sports Hall of Fame inductee Tim Harris Jr.  In addition, Ward coached up to 20 former Hurricanes football players who also competed in track at The U before going on to play professional football, including UM Sports Hall of Fame members Ed Reed, Santana Moss, Clinton Portis, Andre Johnson, Reggie Wayne, and 2022 inductee, Phillip Buchanon.

Ward retired as Hurricanes coach in 2008, but has gone on to coach more athletes to greatness, including at the high school level in both Maryland and locally at Miami's Carrollton School of the Sacred Heart.  Over 50 athletes he’s coached have gone on to qualify for the Boston Marathon. ​