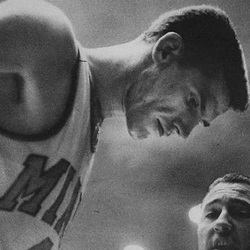 Sadly, Mike McCoy passed away February 15, 2022.  Here is his obituary from The Journal Gazette...


BLAKE SEBRING | For The Journal GazetteMike McCoy, Fort Wayne's first Mr. Basketball and the first 7-footer to play Indiana high school basketball, died Feb. 15 in Battle Creek, Michigan. McCoy, who led South Side to the 1958 state championship, was 81.
South Side finished 28-2 and was ranked No. 1 for most of the 1957-58 season with McCoy leading the way with 17 points and 14 rebounds per game. The Archers also won the city title when four of the five Fort Wayne teams were ranked among the state's top 15.
The highlights were winning three games at Memorial Coliseum against archrival Central, including a sectional semifinal game that went to overtime before 9,418 fans.
In the state title game, the Archers beat Crawfordsville 63-34. It was the second-greatest margin in state finals history as McCoy had 24 points and 20 rebounds. Team members that season included Rich Miller, Carl Stavreti, Mike McCoy, Tom Bolyard, Dan Howe, Jim Vachon, Larry Miller, Bill Meyers, Mike Simmons, Teddy Lebrecht, Ken Howe and Nick DeMetre.
McCoy started his college career at Northwestern but eventually transferred to Miami (Fla.). He led the Hurricanes in scoring and rebounding three years in a row, scoring 1,231 points and grabbing 857 rebounds. During his junior and season seasons, he averaged 19.1 points and 12.6 rebounds to earn honorable mention all-American status. McCoy helped Miami to its first two postseason appearances, making the NIT in 1961 and the NCAA Tournament in 1963.
McCoy was taken by the Pistons with the 21st pick of the 1963 NBA draft and played for a season before going to work for Goodyear. He was inducted into the Indiana Basketball Hall of Fame in 1998 and the Miami Sports Hall of Fame in 2007.
He is survived by his wife, Helen, children Deb and Bill and four grandchildren.