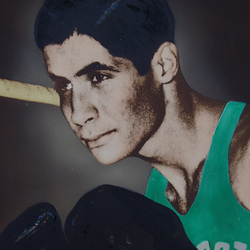 Dr. Mickey Demos brought national recognition to the University of Miami as a boxer during the late 1940's and early 1950's. He was an ace ringman on some of UM's outstanding boxing teams of that era and twice competed in the prestigious NCAA Championships.