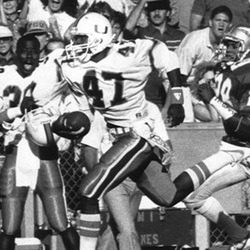 Wide receiver who won Freshman All-America honors from the Football News in 1985, UPI All-America honors in 1986, and 2nd team and honorable mention All-America honors by the Football News and Associated Press as a junior in 1987...became a starter in his red-shirt freshman year in 1985..held UM career records for receiving yards (2,423) and touchdown receptions (26)...was second in receptions (143) and fourth in touchdowns (26) when he left UM...drafted in the 1988 NFL draft by the Dallas Cowboys with the 11th overall selection in the first round, he went on to star for the Cowboys and win three Super Bowl titles.