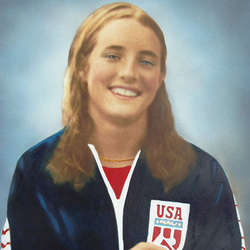 Texan, Melissa Briley came to the University of Miami in 1974 and proceeded to leave her mark on the women's diving program.  Melissa was a four-time All-American diver and a member of UM's national championship swimming and diving teams of 1975 and 1976.  Melissa also competed for the United States in the 1976 Montreal Olympics, finishing 7th in the 10 meter platform event.