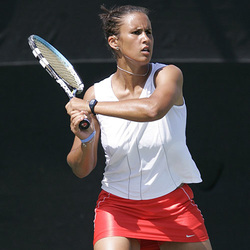 Megan Bradley Rose was a teenage tennis prodigy who represented the United States at prestigious events around the world, including the World Youth Cup and the Maureen Connolly Continental Cup. As a student at Ransom Everglades High School in Coconut Grove, she finished the 2001 year as the top-ranked singles player and second- ranked doubles player in the country.
Though she decided to first experience college at UCLA, where she was an All- American in both singles and doubles and earned International Tennis Association (ITA) Rookie of the Year honors in 2002, Megan chose to come back home and complete her collegiate career at Miami and play for UMSHoF member Coach Paige Yaroshuk Tews, herself a UCLA graduate. Bradley Rose posted a 17-9 record in singles in her first season at UM and helped the team advance to the Big East Conference finals. She was sensational in 2004 with a 37-6 singles record and ended the year ranked #5 in the country, advancing to the semifinals of the NCAA Division 1 Championships and named an ITA All-American.

As a senior, Megan turned in arguably the finest season in UM history by finishing with a school record 44 wins (against only 2 defeats). The year was highlighted by a 39-match winning streak lasting from October 8, 2004 to May 24, 2005, dropping only three sets during the entire streak. She won the singles title at the ITA National Championship and would end the year ranked #1 by the ITA. She was named the 2005 ITA National Player and Senior Player of the Year, the Atlantic Coast Conference (ACC) Player of the Year and both the ACC and UM Female Scholar Athlete of the Year. She and Audrey Banada set a school doubles record with 34 wins and ended the year ranked #6. Her 98 career singles wins is 5th all-time in UM women’s tennis history.

Megan turned professional after graduating with a Bachelor of Science in Education degree (Sports Administration) and couldn’t have asked for a better start to her pro career, winning the Southlake (TX) Women’s Pro Classic in her tour debut. She served as a UM volunteer assistant coach (2009) before being named women’s head coach at Princeton (2009-12) and leading the team to an undefeated Ivy League Championship in 2010. She is currently a Senior Manager of Operations and Player Relations for the Women’s Tennis Association. Married to Jesse Rose and living in St. Petersburg, Florida, the couple has a daughter, Lola, and are expecting a son in May.