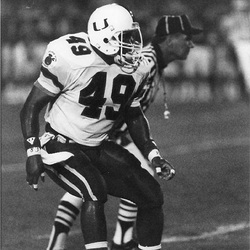 One of a long line of outstanding linebackers at UM...led the team in tackles in 1988, 1989 and 1990...second team all-american in 1988...first team all-american by several major publications in 1990...that same year was a finalist for the Butkus Award given annually to the nation's top collegiate linebacker...member of two national championship teams...also played baseball at UM.