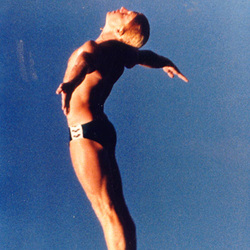 Lenny Layland was a seven-time All-American diver for the University of Miami during his collegiate career, which spanned from 1980-84.  Lenny was a member of the United States National Team, where he was able to win the 1978 Junior Olympics three-meter and age group one-meter titles.  During his freshman season in 1980, Lenny finished sixth in the NCAA three-meter springboard, while earning his first All-American honors.

In 1981, as a sophomore, he finished ninth in one-meter and fifth in three-meter diving.  The top 10 finishes in each event allowed him to earn his second straight All-America honors.  His junior season was more of the same, when Lenny earned All-America honors in both the one and three-meters at the 1982 NCAA Finals.  During his junior campaign, Lenny set a UM record by going undefeated in dual match competition in both one and three-meter events.  In his final campaign with Miami in 1984, Lenny went out as he started, earning two more individual All-America honors at the NCAA Finals to give him a total of seven for his career.