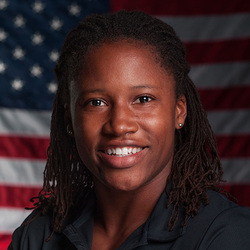 What she hasn’t done might be easier to list!  Lauryn Williams is certainly one of the most decorated Miami Hurricanes athletes of all-time:  Olympian, All-American, record-setter and scholar-athlete. Having set numerous state and school records at Rochester (PA) High School, Lauryn came to Coral Gables and she rewrote the Hurricanes record books and represented Miami with distinction internationally.

Her 2004 season was one to behold as Williams as she became the only woman in Big East history to win three consecutive 100-meters titles, also claiming titles in the 60-meters and the 4x100-meter relay to be named 2004 Big East Outdoor Most Outstanding Track Athlete.  Lauryn would win the 100-meters at The Penn Relays, then claimed the NCAA Championship in the 100-meters with a time of 10.97 seconds, the second fastest time in the World that year. To top off her year, she captured the Silver Medal in the 100-meters at the 2004 Summer Olympic Games in Athens, Greece.

A member of Iron Arrow, the highest honor one can attain at the University, she graduated Miami with a B.B.A in Finance.  She continued her track career by competing in the 2008 Beijing Olympics and winning a Gold Medal as a member of the USA's winning 4x100-meter team in the 2012 London Olympics.  Lauryn then turned her attention to bobsledding and won a Silver Medal in two-woman bobsled at the 2014 Sochi Olympic Games, becoming the first American woman and only the sixth woman in history, to win medals in both the Summer and Winter Olympic Games.