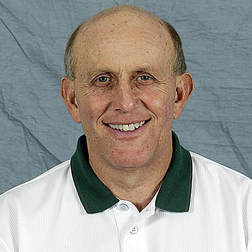 Larry Coker’s career proves that with hard work and lots of patience, great things can happen.  After coaching eight years of Oklahoma high school football, which included two state titles along with two state track titles, and 22 years as a college football assistant, Larry Edward Coker was named the twentieth head football coach at the University of Miami for the 2001 season.

As offensive coordinator under Coach Butch Davis from 1995-2000, he was instrumental in recruiting and coaching many of the players that helped Miami regain its place of national prominence.  Those teams went 51-20 with a perfect 4-0 bowl record and claimed three Big East titles in six years.  Taking over the helm in 2001, Coker would become only the second coach in history (Bennie Oosterbann of Michigan in 1948) to win the National Championship in his first year as a college head coach.

That 2001 team is considered by many the greatest team in NCAA history.  With six All-Americans that year, 38 players from the squad would be drafted into the NFL, including an amazing 17 first round picks.  The 2001 Hurricanes beat their opponents by an average of 33 points per game.   Coker was named the 2001 Bear Bryant Coach of the Year and the American Football Coaches Association Coach of the Year.  When Miami finished the 2002 season undefeated, he joined only Walter Camp from 1888-1889 to go undefeated through their first 24 games as a head coach.

In his six years as Miami head coach, he sported an overall 60-15 record for an 80% winning percentage, good for third in Miami history behind only Dennis Erickson (.875) and Jimmy Johnson (.852), claimed three Big East titles and was 8-2 against arch rivals Florida and FSU.  Over his entire dozen seasons at UM (1995-2006) Coker coached 23 All-Americans and, with tonight’s inductees included, has coached 24 UM Sports Hall of Fame members.

A member of Iron Arrow…the highest honor one can attain at the University of Miami…Coach Coker was hired in 2009 to start the football program at the University of Texas-San Antonio.  Since retiring in 2015, he and his wife, Dianna, still live in San Antonio spending time with daughter Lara and son-in-law Ted Goldmann and doting over their two grandchildren, Daniel and Dillon.