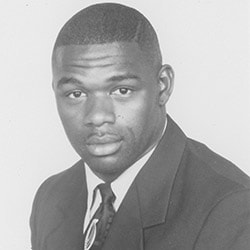 In the history of University of Miami football, Kevin Williams ranks as one of the most explosive all-purpose offensive weapons ever to play for the Orange, Green, and White.  A native of Dallas, Williams averaged over 17 yards every time he touched the ball as a high school senior.

At Miami, Williams made big contributions on punt and kickoff returns.  As a sophomore in Miami’s 1991 National Championship season, he returned punts for touchdowns in 3 consecutive games to set a school record, and also set a single game record with 217 punt return yards against Penn State. As a receiver, Williams caught 23 passes that season for 330 yards and 3 more touchdowns, including the opening touchdown against Nebraska in the Orange Bowl Classic national championship game. Williams finished the season named the BIG EAST Special Teams Player of the Year, First Team All-BIG EAST, First Team All-American by The Sporting News, and Punt Returner of the Year by the Football Writers Association of America.

Williams added 40 more receptions in his senior season of 1992, was named Second Team All-BIG EAST, and afterwards declared for the NFL draft, where he was selected in the second round (46th overall) by his hometown Dallas Cowboys.  Teamed with Hall of Fame members Michael Irvin, Darrin Smith, and Coach Jimmy Johnson, Williams won two Super Bowl rings with the Cowboys, and went on to play 8 years in the NFL.