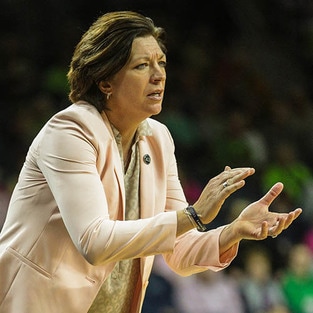 Katie Meier just completed her 12th season at the helm of the University of Miami’s women’s basketball program and has positioned the squad to compete not only in the tough Atlantic Coach Conference (ACC), but to make an annual run in the NCAA tournament. The Wheaton, Illinois native herself was an All-ACC First Team selection as a senior basketball player at Duke, and worked as an assistant coach at UNC-Asheville and Tulane before getting her first head coaching job at UNC-Charlotte in 2001. After getting the 49ers to the post season three consecutive years, she moved to Miami to become the Hurricanes head coach in April 2005.

Meier has led the Canes to the post season for eight consecutive seasons, six of those years in the NCAA tournament and earning 20-plus wins in seven of those years. In 2010-11, the Canes tied for the ACC regular season title with a 12-2 conference record and finished 28-5, gaining Miami’s first NCAA bid since 2004. Katie was named ACC Coach of the Year and Associated Press Co-National Coach of the Year with Connecticut’s Geno Auriemma and Stanford’s Tara VanDerveer. Her record at Miami is 231-152, making her the school’s second winningest women’s basketball coach of all-time behind only UMSHoF member Coach Ferne Labati’s 303 victories. Meier’s overall career record is 307-197 at UM and Charlotte.

In 2013, Meier led the USA to the gold medal with a perfect 9-0 record at the FIBA U19 World Championships held in Lithuania and, for her efforts, was named co-recipient of the USA Basketball National Coach of the Year award with Oklahoma City Thunder coach Billy Donovan.
Ever a developer of talent and a master motivator, Meier has coached some of the program’s greatest athletes to conference and national accolades. That honor roll includes UMSHoF member and Hurricane Basketball’s all-time leading scorer Tamara James, as well as Shenise Johnson, Riquna Williams, Stefanie Yderstrom, Adrienne Motley and Jessica Thomas. During her years at Miami, Katie has seen 17 of her players sign professional contracts. In addition, ve of her assistants have moved on to Division 1 head coaching jobs, showing her eye for recruiting and developing talented basketball coaches as well as student-athletes.

Having just signed a contract extension to coach Miami until 2024, the future looks bright for the Hurricanes women’s basketball program and Coach Katie Meier. “I’m proud of what my staff has been able to accomplish so far,” Meier said, “and yet we all are pushing for that next level. Commitment and continuity are major factors in a program’s development and this extension provides that. Personally, I am so deeply rooted here at The U and in the Miami community, which makes this even more special.”