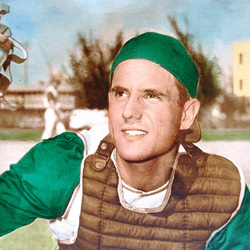 During Jorge Maduro's career at the University of Miami, 1967-1969, the Hurricanes set the bar for future 'Canes baseball teams. Maduro, out of Jacksonville, Fl.,  was a strong defensive catcher who played in 98 of UM's 120 games during those three years. He helped lead the 'Canes to an impressive 81-37-2 record, hitting .335, with a slugging percentage of .451 and a then school record of 13 doubles.

Behind the plate, Maduro handled two of the schools all time great pitchers in Thom Lehman and Warren Bogle. The tandem of Maduro and Lehman were a record breaking act on two occasions as Jorge caught Lehman's record 21st career victory and added a double in a 5-1 win on May 1, 1969 and on May 7, 1968 he drove in the only run in a 1-0 victory and Lehman's season record 11th win. Maduro also caught another Hurricane milestone when he caught Coach Ron Fraser's 100th career win. Maduro was one of the reasons the Hurricanes posted a first every 30 win season, 31-11, in 1969. After his senior season he sign a major league contract with the New York Yankees.